This month’s Modern Blocks Quilt Along block is called Pogo Stick. I had such a hard time deciding which fabric to use for this one. I knew I wanted the crisp white background but any of my fabrics would have looked great as the pop of colour. In the end I settled on a print that was not too directional and a relatively small scale. I thought a larger print would be lost when it was cut into strips. If you use a directional print, you might want to be careful cutting so that the pattern is all around the same way. This would actually look quite striking in stripes I think if you took the time to cut carefully.

This month the ModernQAL is being hosted by Ros of Sew Delicious. She has a step by step tutorial on her blog to help you piece this one. I love the aqua herringbone that she chose for her block! Make sure you also have a look at our Pinterest board – there are some blocks already up there by readers and I love how some of them have included a number of fabrics in their blocks. Here are my other blocks in this quilt so far:

It’s not too late to join in if you’re interested. Visit And Sew We Craft to see links to all the related posts so far. Remember to look out for sharing on Instagram, Pinterest, Facebook, Twitter and Flickr with the hashtag #ModernQAL. When you’ve made your Pogo Stick block, we’d love you to link up and show it off over at And Sew We Craft. There are even some prizes to be won! 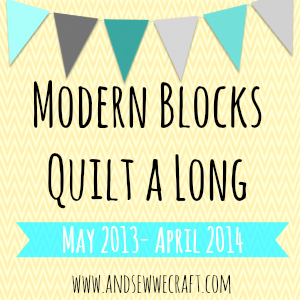 Find it on Amazon: Modern Blocks: 99 Quilt Blocks from Your Favorite Designers

« Off to Craft Retreat
Facebook: How to Schedule Posts »